We waited all year for this trip 😀😀 A half term and wedding anniversary trip, plus we went the whole hog and booked the night away in the Legoland Resort Hotel as well.  It seemed a bit silly to go all that way down and back in a day. Besides, day 2 was going to be free anyway if we booked the hotel.

We tried to keep it a secret from the kids for as long as possible.  That only lasted about 4 months, as, when we swopped the phones around we left the diary date in one of the phones, only for child 1 to discover the date. She did well not spilling the beans, despite us saying it was only a provisional date anyway.

Now being the organiser that I am, I asked prior to the trip what availability Legoland had in the way of gluten free options and I have to say that the response was pretty quick. A link was provided for us to search through and boy did we search…….long and hard.  We took some supplies just in case.

On arrival on the morning of day 1 we were greeted by the lovely hotel reception team, very helpful and very patient for a bunch of rather giddy day trippers from the North! We just wanted to get into the Park! After a moment of planning failure (I forgot to pick up the printed tickets🙄) we quickly recovered by showing the eVersion of the tickets and we entered the Park.

It has to be said that the staff were very polite and generally service was good. You could almost forgive them a little as they must be coming to the end of the season and whilst it was half term for us, there were probably more kids off the previous week for the bulk of the half terms from across the country. There were about 5 rides closed – that we weren’t made aware of and there were several kiosks closed due to the low numbers. As a consequence the ques for those kiosks that were open, were long and frustratingly slow. 20 minutes for a vending machine coffee at a little under £3 was not great value for money.

And then there’s the food.

Now having a child with coeliac disease has its problems as you may be aware. None more so than trying to find out what is on the menu and what the child can and can’t eat. It’s mostly an arduous task, Legoland could do worse than putting themselves in our or anyone else’s shoes with an allergy/intolerance/Coeliac disease. It could help to make it a little easier.

We could find no kiosks in the Park that provided gluten free foods that we could safely say we could eat in. Not even pre-packaged goods. Nothing in the burger kiosks, the chicken kiosk, the pizza or pasta restaurant except for a gluten free pizza base (what about the sauce and toppings?) Don’t get me wrong, there are posters on the walls showing all the allergen information, nothing that would mean he could be included with the rest of us. We did take a chance with a portion of chips from the Fish and Chip Shop…. no adverse effects. But at £4 odd, we shared the portion! 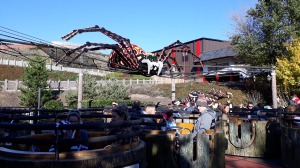 Dinner was an altogether different experience. Again the staff were very helpful – when they could eventually find the allergen data sheets. Which I have to say are on pre printed FSA sheets, not even the decency to create their own! It didn’t really fill me with confidence. I read said data sheets, for both hotel outlets ‘The Tavern’ an a la carte type affair (rather pricey) and ‘Bricks’ a buffet style restaurant in the other hotel. Yes a buffet…… the horror of a buffet for anyone with a food intolerance/allergy/coeliac disease would send a shiver down the spine. Cross contamination issues abound…..An hour before dinner service, the team were unable to tell me what was on for dinner, but I was given the allergy data sheets anyway.

Needless to say, we went out into Eton for dinner and had a lovely meal. Where we were positively welcomed, served and Noah could eat almost anything on the menu without fear of being ill.

Now breakfast was not much different. A buffet breakfast (shivers again)….. Now I know, serving 400 people food in a short period of time is not easy and a buffet is perhaps the easiest solution. And the team, were again, very polite but we got the impression that Legoland just aren’t geared up for intolerances/allergies/coeliac disease. Yes Schar breakfast cereal was available and that was about all. Well. We did get 3, yes 3, prepackaged chocolate chip muffins and they were huge! Not the best start to a day! There are such things as gluten free sausages and fruit is not a pudding

But it was just disappointing and as I’ve said before, a little boy of 8 just wants to fit in and as a family we want meal times to be an inclusive affair, not a ‘look at what you could be eating’ affair. We’d rather go without or go elsewhere.